The shipping arm of Danish conglomerate A.P. Moeller-Maersk A/S is looking to buy German peer Hamburg Süd, people with knowledge of the matter said, a deal that would help Maersk Line boost its presence in global trade with Latin America. 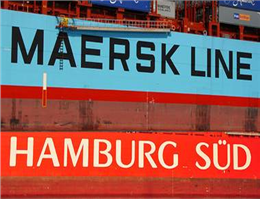 According to MANA, Maersk Line, the world’s leading container-shipping operator, is interested in acquiring the entire Hamburg Süd business,
Hamburg Süd, the world’s seventh-biggest container operator in terms of capacity, is part of the Oetker Group, a family-owned German conglomerate involved in shipping, banking, food and beverages.
Container ships that transport 95% of the world’s manufactured products are caught in one of the deepest ever down-cycles, marked by anemic global trade and a glut of tonnage in the water.
Those conditions have kicked off an unprecedented wave of consolidation, with many of the 20 biggest operators either joining alliances or merging to weather the crisis.
France’s CMA CGM, the third-biggest player, last year bought Singapore’s Neptune Orient Lines for $2.4 billion, and Japan’s three largest shipping companies said in October they would merge their container operations.
Hamburg Süd said it had nearly 6,000 employees at the end of 2015, and owned and chartered 130 container ships.
According to data provider Alphaliner, the German company accounts for 3% of global container capacity, with the ability to transport 600,000 containers.
The value of its fleet is around $1.4 billion according to VesselsValue, another maritime data provider.
0
Tags: Hamburg Süd maersk buy acquisition
Visit Home
Send to friends
Print
Newsletter
Share this news