A planned combined sale of troubled STX Offshore & Shipbuilding (STX O&S) and its profitable STX France yard has been halted in Korea. 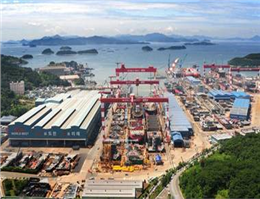 According to MANA, A judge at Seoul Central District Court told the Wall Street Journal that the process was stopped because an unnamed UK investment fund could not demonstrate how it would raise the money to buy the two companies.
The fund had earlier submitted a letter of intent to the court.
“We’ll have to restart the sale process for STX sometime next year by inviting bids again,” he said.
But he added that a separate disposal of STX France will continue.
European shipbuilders Fincantieri, Damen and DCNS are believed to be in the hunt for the Saint-Nazaire yard.
They will submit binding offers by 27 December.
STX O&S filed for court protection this year despite more than $3bn in financial aid from creditors.
Its rehabilitation scheme includes asset sales, cost-cutting and a debt-to-equity swap to make shipbuilding at its main Chinhae facility viable again.
0
Tags: STX sale
Visit Home
Send to friends
Print
Newsletter
Share this news