South Korea’s STX Offshore & Shipbuilding has filed for bankruptcy protection in Texas, US in an attempt to prevent its assets from getting seized by creditors. 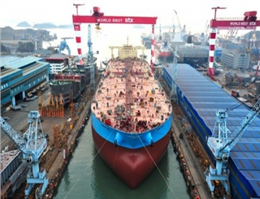 According to MANA,The US Bankruptcy Court has granted STX a temporary restraining order to block creditors from seizing its US assets, it was reported.
The troubled shipyard had filed for a court-led restructuring in May this year with the the Seoul court granting the receivership in June.
Since then, STX’s efforts to restructure had since been impeded by many civil lawsuits it had to handle.
STX was once Korea’s fourth largest shipbuilder just behind the country’s big three of Hyundai Heavy Industries, Samsung Heavy Industries and Daewoo Shipbuilding & Marine Engineering.
Recently, Frontline cancelled four VLCC newbuildings ordered at STX, as it was unclear if the yard can still deliver the ships in 2017.
The financially distressed STX has been under the control of its creditors since April 2013, and has failed to regain financial stability despite receiving more than KRW4trn ($3.5bn) in aid from its creditors over the years.
0
Tags: STX Offshore & Shipbuilding US bankruptcy
Visit Home
Send to friends
Print
Newsletter
Share this news