$14 Billion in Cargo Stranded at Sea

The bankruptcy of South Korea’s Hanjin Shipping Co have left as much as $14 billion worth of cargo stranded at sea, reports WSJ. 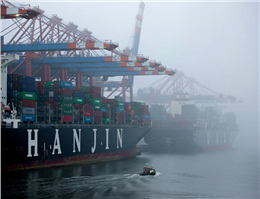 According to MANA,The financial woes of one of the world’s biggest shipping lines has thrown ports and retailers around the world into confusion, with giant container ships marooned and merchants worrying whether tons of goods will reach their shelves.
It also it remains unclear if the company can afford to pay the army of workers needed to unload the ships. The owners are trying to recover their goods and get them to customers.
Though Hanjin accounts for only about 3.2% of global container capacity, the disruption, which comes as retailers prepare to stock their shelves for the holiday season, is expected to be costly, as companies scramble to book their goods on other carriers.
Hanjin Shipping had about 600 billion won in unpaid obligations such as charter fees and terminal use fees as of end-August, before a South Korean court approved its court receivership.

According to Reuters, its debt stood at 5.6 trillion won at the end of 2015, and a bankruptcy would be the container shipping industry’s largest.
0
Tags: Hanjin cargo
Visit Home
Send to friends
Print
Newsletter
Share this news