Iran –Oman ministers finalized the agreement on maritime delimitation between the two countries. 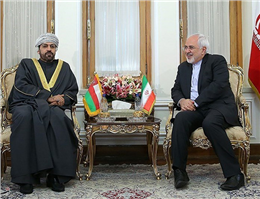 In a meeting with Omani Interior Minister Hamoud bin Faisal Al ,Iranian Foreign Minister Mohammad Javad Zarif stated: excellent relations of Iran with Oman indicated the resolve and prudence of Iranian and Omani leaders.
The Islamic Republic of Iran considers no limit for expansion of relations with Oman, he continued.
The Iranian minister, for his part, hailed Iran-Oman ties as a role model for the other countries.
Zarif also touched on the “historical juncture” in the regional developments, stressing that “constructive cooperation and mutual understanding should replace the illusionary competition in the region.
He further noted that instability and insecurity in any country will pose a threat to the other parts of the region and even to the world.
Omani Interior Minister Hamoud bin Faisal Al also remarked: the bilateral relations have reached a “premium level.”
He continued: we do intend to expand mutual ties with Iran.
Iran –Oman the ministers signed an agreement on demarcation of sea borders between the two countries.
0
Tags: Iran –Oman maritime delimitation agreement
Visit Home
Send to friends
Print
Newsletter
Share this news