MITSUI O.S.K. Lines (MOL) expects to record an extraordinary gain of about ¥19b ($184.4m) from the sale of its subsidiary’s – MOL Logistics Europe (MLE) - stake in wine and spirits freight forwarder J.F. Hillebrand. 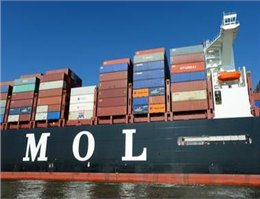 According to MANA,One of Japan’s Big Three container lines, MOL said Wednesday that the stake was sold after a review of its non-core asset ownership
The amount of the capital gains might change due to foreign exchange and other factors, the company said adding that it had already included
MOL reported that its net income slumped 89% in its fiscal first quarter as the dry bulk, tanker and container shipping freight markets deteriorated, despite the structural reforms it initiated and the benefits of lower bunker prices.