A representative from Turkey company announced that his company is fully prepared to launch a shipbuilding center in Anzali Port, which is equipped with the latest state-of-the-art technologies. 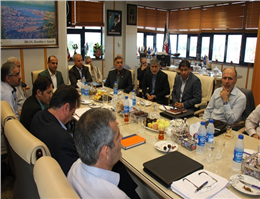 In an interview with MANA reporter, this official representative stated: his company possesses three big shipbuilding yards and a Luxury shipbuilding complex in Turkey , it is fully prepared to launch a shipbuilding center with the latest state-of-the-art technologies, he continued.
Referring to the record of Anzali Port in maritime and port activities ,the director of Gilan Province Ports and Maritime Organization elaborated on the capacities of this port and stated: Anzali Port as one of the oldest Iran Northern port enjoys the capacity of 11 million tons for embarkation and disembarkation, in the light of the development plan it would rise to 17 million tons, he added.
With regards to the commercial exchanges of Anzali Port with all the countries surrounding Caspian Sea, Hossein Cheraghi remarked: its biggest commercial partners in the Caspian Sea are Russia, Kazakhstan and Azerbaijan and 1500 to 2000 vessels call at Anzali Port annually.
The director of Gilan Province Ports and Maritime Organization continued: Anzali port will commence its activities in the Tourism Sector, the Caspian Sea is an appropriate region for investment in the tourism industry, Cheraghi asserted.
0
Tags: Shipbuilding turkey
Visit Home
Send to friends
Print
Newsletter
Share this news