In a live televised program last night, the Iranian President, Hassan Rouhani, addressed the Iranian nation: “Facilitation of shipping activities is a substantial achievement of the Joint Comprehensive Plan of Action (JCPOA); and during post-sanctions era, a good opportunity has been established not only with respect to selling oil and achieving our property, but also regarding the insurance issue and shipping activities.” 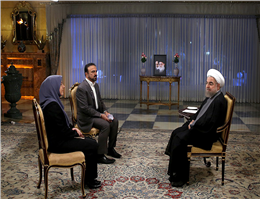 According to MANA reporter, referring to the speech delivered by the Minister of Petroleum concerning the fact that the Iranian oil is sold in Euro and the income of oil sales shall be settled into the account assigned by the Ministry of Petroleum, Dr. Hassan Rouhani stated: “Today, more than 400 foreign banks have financial communications with Iran and this number is continuously being increased. Thus,during the post-sanctions era, a good opportunity has been established not only with respect to selling oil and achieving our property, but also regarding the insurance issue and shipping activities.”
He further stated: “Formerly, we were under sanctions with respect to shipping areas, leading to a situation in which large vessels did not call at Iranian ports and thus we were inevitably forced to ship the respective goods to our ports by dhows, which imposed enormous expenses on Iran.”
Asserting the execution of JCPOA in the realms of insurance and shipping activities, Dr. Rouhani remarked: “JCPOA has been executed very well in some areas such as exporting oil and gas, insurance, shipping activities, and money transfer; however, there are still some problems with respect to some issues such as non-presence of large foreign banks and their refusal of commencing banking activities for Iran (which is resulted from their continuous excuses or the pressures imposed on them behind the curtain) as well as some issues related to transferring or changing foreign-exchange reserves.
In spite of the mentioned problems, the procedure of JCPOA is in such a way that the more we advance, the more achievements we get; and it is hoped that we can pave this way by unity, alliance and solidarity.”
0
Visit Home
Send to friends
Print
Newsletter
Share this news