Saego Line, a subsidiary of Danish shipping company Maersk, has introduced a new vessel, the Independent Accord, to its feeder service calling at Liverpool, UK. 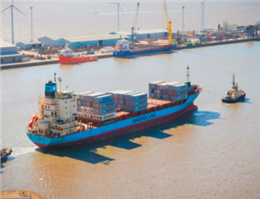 The 1,579 TEU Independent Accord has already started operating on the new cargo route between Spanish Algeciras, Liverpool, and Dublin, Ireland, that was launched in April 2016, MANA correspondent reported.
The service was established to provide direct cargo connections to and from the north west of England to Ireland and onwards to the Mediterranean, providing trade links to North and West Africa and offering six-day transit times between Algeciras and Liverpool.
“The return to Liverpool in April was the first time that the Maersk Group had used the port for UK cargoes in over 10 years,” Peel Ports said.
The companies’ return to Liverpool comes in the run up to the opening of Liverpool2, a new USD 500 million deep water container terminal.
Liverpool2 started handling its first containers earlier this month and will continue with a phased opening throughout the summer and full operation of Phase 1 from the autumn.
0
Tags: feeder service maersk Denmark Container
Visit Home
Send to friends
Print
Newsletter
Share this news