Larijani: IRISL has noteworthy Effect on Iran’s Economic/ IRISL to Renovate Its Fleet

According to MANA, Parliament Speaker Ali Larijani said on Tuesday that Islamic Republic of Iran Shipping Lines (IRISL) should use its economic capacities for joint venture foreign investment. 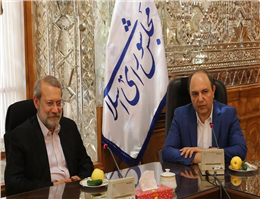 “We hope the current year to be full of prosperities for Iranian people and to be active in new economic and political atmospheres”, Larinjani made the remarks in a meeting with Managing Director and head of Board of Directors of Islamic Republic of Iran Shipping Lines (IRISL) Mohammad Saeedi.
IRISL to Renovate Its Fleet
The speaker, referring to post sanctions era, declared that the sanctions created problems for economic atmosphere of IRISL’s fleet. However, at a time Iran opted to renovate the naval fleet and upgrade national shipping industry.
He believed IRISL experienced the worse effects of sanctions and emphasized that all should know the value of IRISL.
He stated that IRISL used its whole capacity during sanctions and should be registered in Iran’s resistance history.
The speaker said that nuclear deal was the success of the Iranian diplomacy and that a new situation has taken shape by national aspirations and guidelines of the Supreme Leader, although certain issues remained unresolved yet.
Larijani further added that foreign countries are keen to use Iran capacities and accepted the fact that without Iran’s help, they wouldn’t reach their goals now that the sanctions have been lifted.
Advancement of Iran rooted in Marine Transport
Larijani referred to marine transport as the most effective factor in advancement of the country and said that Majlis will support IRISL by adopting legal provisions.
He believed that financing and foreign investment will help IRISl’s fleet to be improved. He referred to creative mind of Dr. Saeedi and said we hope IRISL to create a great evolution.
Moreover, Larijani announced that IRISL has the most important and influential function in Iran’s economic.
At the opening of the meeting, Managing Director and head of Board of Directors of IRISL represented a report on IRISL marine transport and development plan to achieve the best ranking among competitive companies of the world and asked Majlis to support them.
Larijani, referring to the position of IRISL as having the biggest fleet in region, announced that IRISL with the capacity of five million DWT is standing on place 23 in international ranking.
IRISL Competes Strongly in International Arena
Managing Director and head of Board of Directors of IRISL, said that during the post sanctions era IRISL’s fleet hadn’t advanced significantly, but now we have to compete strongly in international arena.
He pointed out to the operation of East Asian line during sanctions and declared that the capacity of transportation, fleet and manpower are all of high importance now and we should do our best to preserve all the lines.
He said that during JOCPA, the first vessel of IRISL fleet started its travel at the beginning of Norooz to North of Europe and refereed to the cooperation of IRISL with one Italian company to support Mediterranean Sea and south of the Europe.
Another proceeding of IRISL relates to launching Latin American shipping line. The first vessel of IRISL fleet recently returned from Brazil through this line. He emphasized on promoting East Asia line and the first vessel’s travel to South Korea through this line.
He continued: “revival of Japan shipping line is on the government’s agenda as well as consultation regarding the restoration of Vancouver line”.
He, referring to the problems of ship’s reinsurance, declared that two more basic problems about class and classification of ships have been solved during the post sanctions era.
He added: “fortunately, IRISL is equipped with professional manpower that is familiar with international market”.
He referred to the problems facing renovation of the fleet and said: “due to the limitation of interior resources, we intend to use foreign resources”.
Ports & Maritime Organization will auction the terminals in the near future because giving the authority of a terminal to a foreign company will result in problems strategically. So, it is preferred to joint an outstanding interior company with a foreign company to overcome probable difficulties, he said regarding the assignments of terminals to foreign companies.
0
Visit Home
Send to friends
Print
Newsletter
Share this news