In an announcement Wednesday, the American Association of Port Authorities suggested that its member ports intend to spend over $150 billion in combined infrastructure investments by 2020. 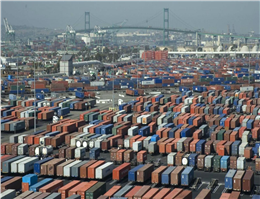 According to MANA, “Infrastructure investments in America’s seaports and their intermodal connections – both on the land and in the water – are in our nation’s best interest because they provide opportunities to bolster our economy, create and sustain jobs, enhance our international competitiveness, and pay annual dividends through the generation of more than $321 billion in federal, state and local tax revenue,” he said.
Consulting economist John C. Martin said that the ports' investments were a major contributor to employment and economic activity in and of themselves, even before considering the $4.6 trillion that coastal ports contribute to the American economy each year.
The AAPA suggested that shoreside intermodal connections and dredging are essential to the continued performance of its member ports, and that insufficient federal investment would mean restricted port volumes. The association cited a study by the American Society of Civil Engineers finding annual cost to American business of nearly $300 billion from deteriorated highways and $10 billion from insufficiently deep navigation channels.
The call for additional government backing coincides with a high point for political cooperation on infrastructure. The U.S. Congress approved the first long-term transportation bill in a decade late last year, bringing a total of $305 billion and a newfound sense of predictability to federal project funding; the funding bill will extend through 2020. But AAPA suggested that more will be required.
“AAPA applauds enactment of the FAST Act surface transportation bill at the end of 2015 . . . While that was a major positive step, additional investments are needed to effectively handle the nation’s burgeoning freight volumes,” said Mr. Nagle.
0
Visit Home
Send to friends
Print
Newsletter
Share this news