Collaboration Signed between IRISL and the Danish ship owner’s Association

A 12-member delegation of Denmark ship owners ‘union sat with the director of Islamic Republic of Iran Shipping lines ,chief of Iran’ s ship owner ‘s union, and the board member of this association to negotiate and exchange ideas over the mutual collaboration axes. 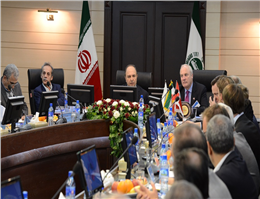 Regarding the enhancement of Iran and Denmark ties in the post-sanctions era, MANA correspondent reported, Director of Islamic Republic of Iran Shipping Lines stated that given the current promising conditions of Iran, sanctions will be lifted in the upcoming days, and the collaboration between the ship owners' associations of the two countries will be more possible than ever. We do hope we could build a new cooperative atmosphere with Denmark in the fields of shipping, off-shore issues, and exports of gas and non-petroleum material.

Pointing out to the lifting of the sanctions, Dr. Mohammad Saeedi asserted that both IRISL and National Iranian Tanker Co., which is responsible to export Iran's crude oil, suffered from sanctions in all dimensions and to all degrees. Hence, in the era of sanctions, neither IRISL nor NITC were allowed to dock at European ports, and likewise, the majority of world container shipping lines stopped their commuting to Iranian ports.

With the lifting of all sanctions, he added, the sanctions related to shipping lines and ports will also be lifted, and we do hope that ever since the upcoming days when JCAOP will be executed, our ships could immediately travel to European ports, based on the agreed-upon matters.

"Immediately after the sanctions are lifted, we could commute to the European ports, and export our export commodities such as petroleum products, non-petroleum products and cargo goods to European ports; this could be an excellent market for exports and revenue", stressed the Head of the Board and the Director of Islamic Republic of Iran Shipping Lines.

Regarding the merits of such collaborations, he added that currently, IRISL ships could operate with Iran's flag now when traveling to European ports, and they could hence utilize international insurance services. In the course of the sanctions, Iranian ships could not raise Iran's flag on their deck; with the lifting of the sanctions, nonetheless, we will be able to raise the holy flag of the IRI on our ships.

In regards with updating the IRISL fleet, Dr. Saeedi stressed that a comprehensive plan to promote and expand IRISL representative offices in European countries and under-sanction regions was devised and launched since last month. He added that modernizing and renovating its fleet is an important post-sanctions measure for the IRISL.

Ultimately, the Head of the Board and the Director of Islamic Republic of Iran Shipping Lines outlined that in the light of these negotiations, Danish companies expressed their interest in cooperating with IRISL as Iran's national fleet as well as with Iran's Ship Owner‘s association. On the other hand, given that Maersk Group is currently in business in some of Iran's off-shore and off-shore jack-up, it announced its willingness to extend its cooperation with Iran's National Oil Company in off-shore projects.

"one of the merits of Maersk Group is its container lines, and it could work jointly with IRISL to commute both in international lines and in the lines between the two counties" further stated Dr. Saeedi.

In this meeting, moreover, Iran's National Oil Company, Gas Export, Maritime Installations, NITC and the association of Ship owners expressed their perspectives as to their cooperation with Danish companies.